Welcome to the DAILY KENT STATER DIGITAL ARCHIVE where issues of the Kent State University newspaper are available in digital format.

This student-run newspaper has been published since 1926 under the titles of The Searchlight, The Kent Stater, and The Daily Kent Stater. The archive includes issues dating from February 1926 through August 2020. Also included are Kent Summer News and Summer Stater issues from the 1950s, 1960s, 1970s, 1980s, 1990s, and 2000s. From 29 August 2013 through spring 2015, one issue per week was released under the title of KSU Buzz, a weekly entertainment magazine. Please note that there were no issues of the paper from July 1943 through August 1944 and from Fall 1950 on file in print or on microfilm in Kent State University Special Collections and Archives. There was no issue published on Monday, May 4, 1970, as during this time period, the paper was published only on Tuesday-Friday during the regular term, despite its title indicating it was a daily. Campus was closed for several weeks following the May 4, 1970, shootings and students were sent home. Publication of the paper was suspended and did not resume until the June 26, 1970, issue of the Kent State University Summer News, after students returned to campus. Within some issues from the 2000s, some damage has occurred to portions of pages due to the binding process. No printed issues were published between March 10 and August 25, 2020, due to the COVID-19 pandemic. 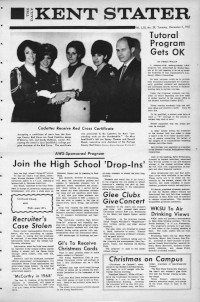